Advice Columnist Smacks Down Biphobe: Dear Lady A: Skeptical about the B

There is not a bisexual person anywhere on the planet who hasn't at one time or another been subjected to this type of insulting nonsense. And while we all know not a word of it is true, usually we are too busy being horrified/hurt/angry to think of the just the right stinging retort that will not only put the boorish person in their place but will also let in actually truth and light. Well no worries, bisexual heroine Lady A, the advice columnist for the Chicago Phoenix has done it for us in this polite, factual but stinging retort to an obnoxious ignoramus.

DEAR LADY A: The people I know who claim they’re bi are attention-seeking and creepy. I honestly think, of the “bisexuals” I know, the guys are just gays who can’t emotionally handle being gay, and the women are trying to keep potential boyfriends interested with the promise of threesomes. Are actual bisexuals even real? If so, where are they hiding?~~ Real Homo, Skeptical About The B in LGBT

DEAR DOUBTING HOMO: I’m not hiding and I’m bisexual, so your statement is really more about your own mistrust, isn’t it? It is the worst kind of queer self-sabotage to imply that a sexuality simply cannot be, because you can’t personally imagine it. It’s also ironic. Normally, I have a special contempt for assholes who attempt to inform me that my bisexuality is an urban myth promoted by terrified queens or an affectation I employ to impress my boyfriends. But I will try to exercise patience with you. I will even try to see it from your perspective for a moment.

To pretend like some haven’t used bisexuality as a “gateway drug” to gay or a boy-bewitching sexual tactic, would be disingenuous. Yes, there are folks who, for reasons including self-delusion, hipster trend-grubbing, or maybe just an attempt to earn better money at the stripper pole, might be bisexual pretenders. There are also straight pretenders and gay pretenders, but that doesn’t make you any less gay, does it, sir? And those gay pretenders, by the way, are sometimes boys and girls who love both boys and girls, but felt so unfairly judged by members of their own LGBT community that they actually went back into the bi closet by “picking a side.” 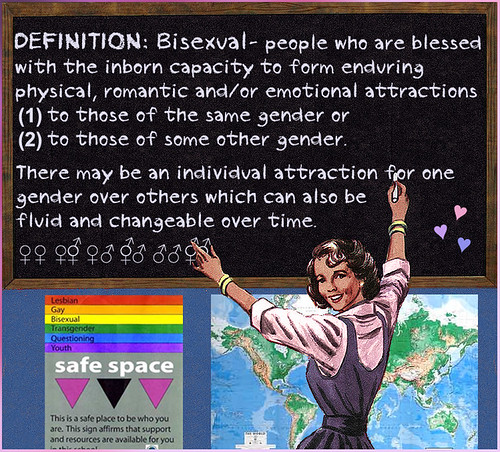 But for the most part, people who call themselves bi, flexible, curious or any other similar designation, are telling you the truth. You know how I know? Because it’s hard to be bi. Society immediately thinks the boys are lying and the girls are sluts, they’re queer but they’re not, they’re straight but they’re not, and they are generally just assigned the convenient homo or hetero sexuality that happens to coincide with their most current partner. They’re also some of the least supported queers in terms of organized help and education … And that’s not fun. So they must have a damned good reason (like the fact that they’ve realized they don’t give a fuck what you or society thinks they ought to be) for standing up and saying who they really are. Just like you had a damned good reason for telling the world who you really are, sir.

So, in answer to your question: Yes, bisexuals are real, and yes, they’re sometimes hiding in your ranks, and could possibly be one of your closest friends or lovers. Being fearful of something you don’t understand and can’t control is scary, isn’t it? On the bright side, now you know how homophobes feel.

Lady A is a headmistress with an emphasis on head. She may even spank you. But only if you like that kind of thing. She can be found in the Chicago Phoenix, on Facebook, Twitter as well as all the best places to see and be seen (and sometimes even do), in Chicago.